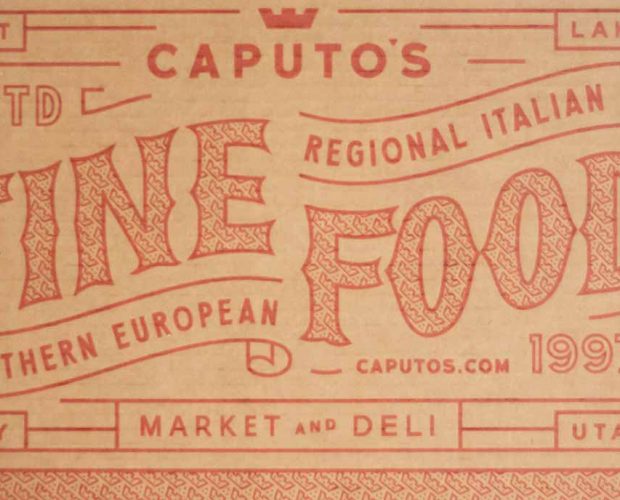 by Heather Aagard on December 21, 2020
post_password_required

You’re still not sure what to give, and you haven’t started shopping yet? That’s OK, we won’t tell a soul. In an effort to inspire your food gifting, here’s what some of your favorite faces from Caputo’s are giving to their friends and family this year.

Don’t see your favorite monger here? Drop by before the holiday—we’re open through the afternoon of Christmas Eve—and ask them for their personal recommendations. We’re certainly not lacking in opinions around here. 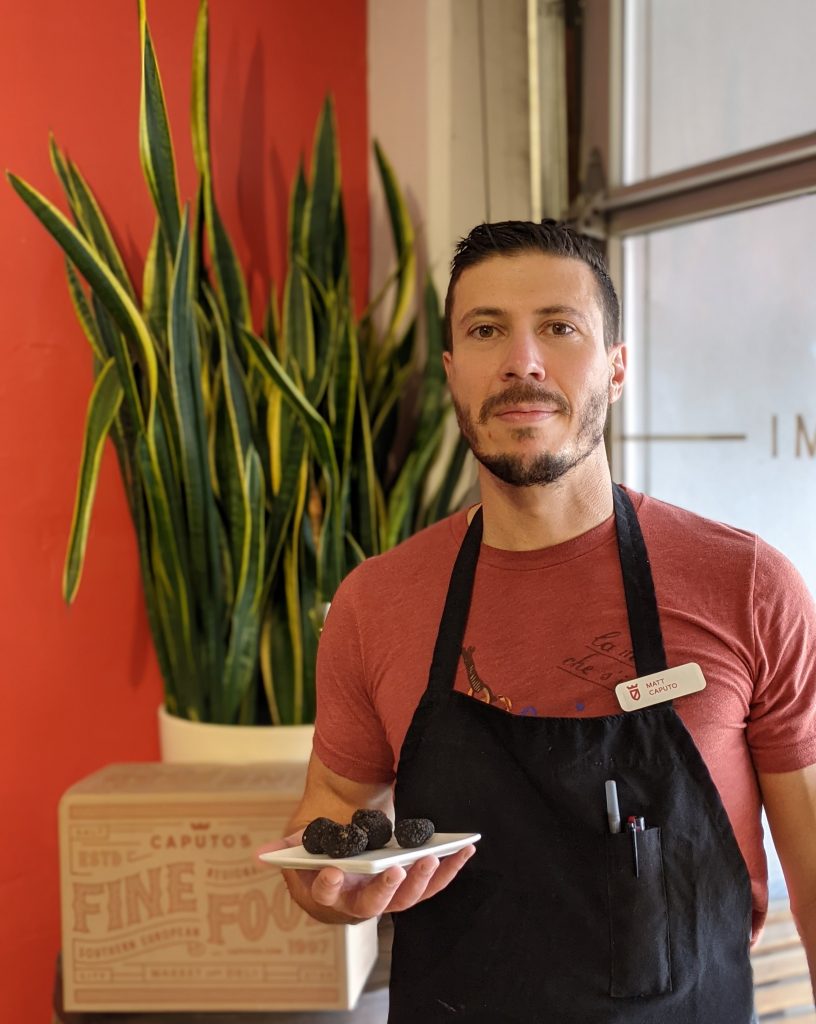 Fresh Black Truffles – As the ultimate boss-man, Matt has chosen the ultimate foodie gift – fresh black truffles. (Pssst – they also look suspiciously like coal, which was what ultimate boss lady Yelena’s suggested gift for Matt would be…). 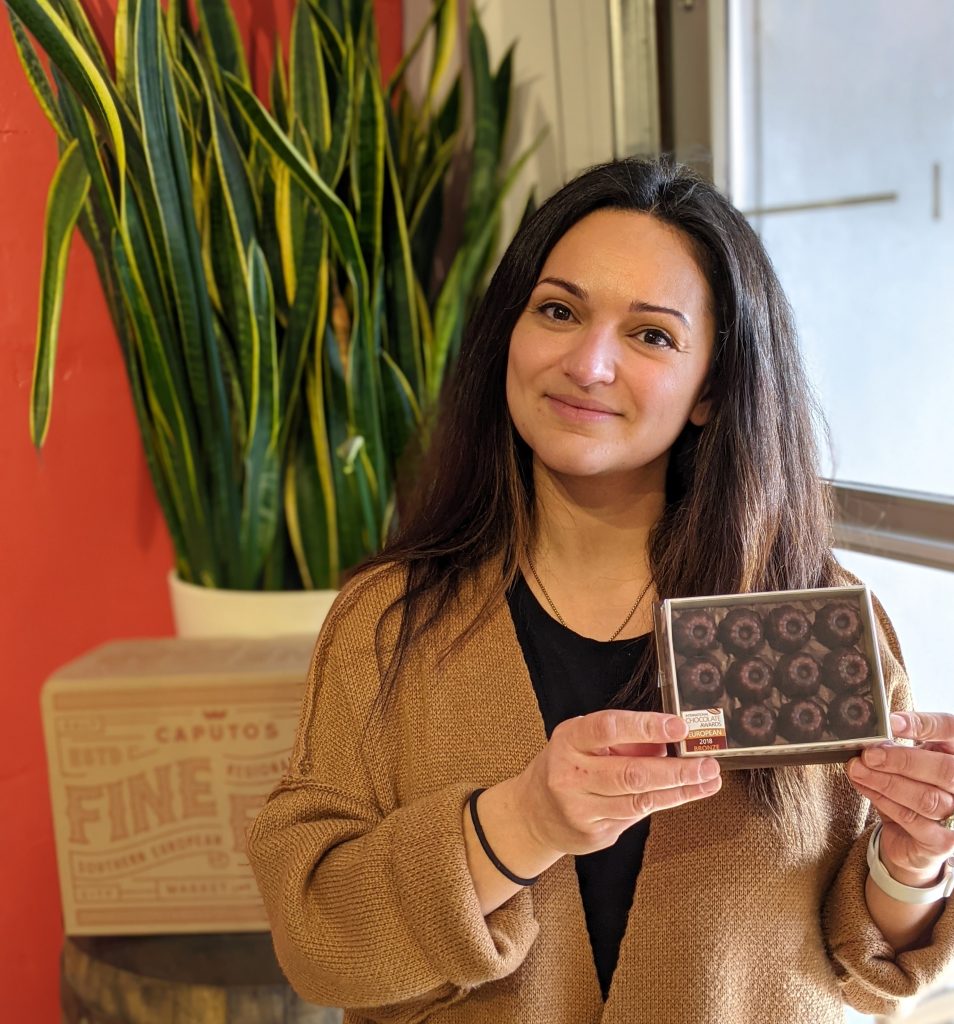 Chapon Canelas – Yelena is THE classiest lady we know. And her gifting choices are no different. This year, she’s giving French chocolate wizard Chapon’s exquisite Canelas – tiny French confections with nougatine and a dark chocolate shell. 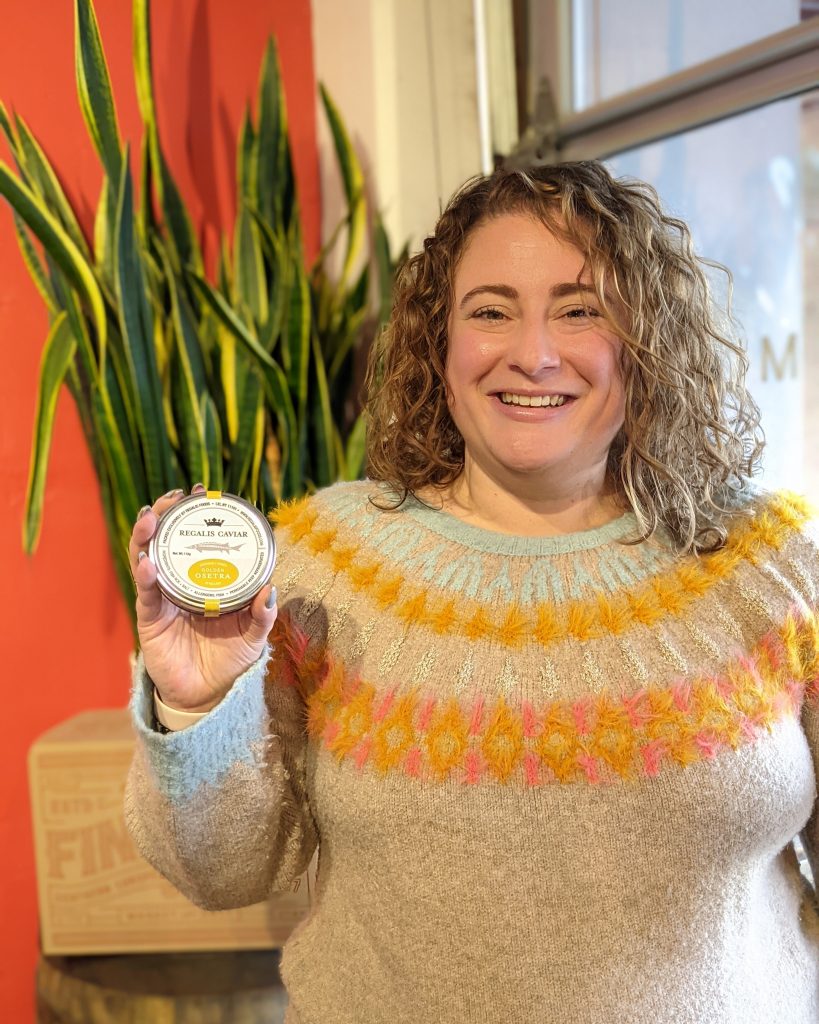 Regalis White Sturgeon Caviar – We all know Adri does NOT mess around. So when Caputo’s brought in caviar for the first time, she scooped up a 1 oz jar faster than you can say “fancy.” 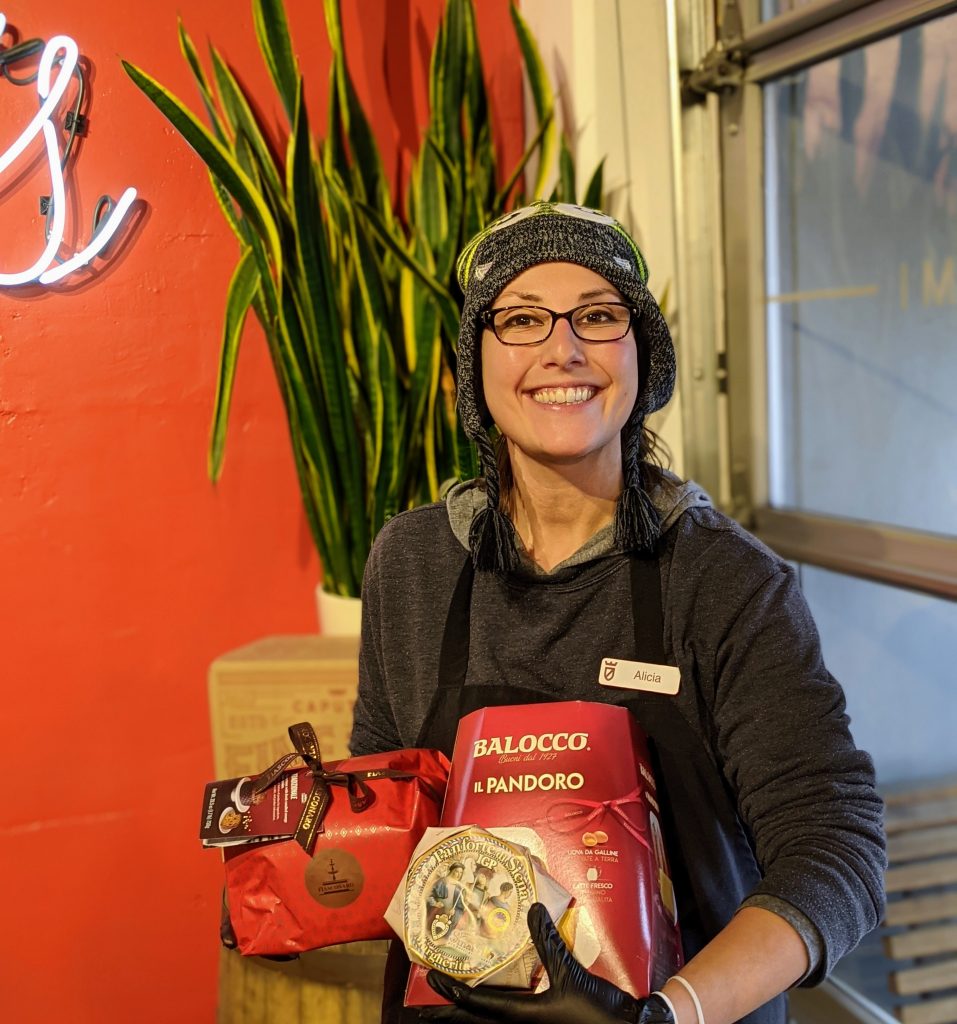 Hot Off the PAN –  An Alicia original. If you’ve ever met Alicia, you’d know she loves a play on words! Her gifts are no different. She’s giving all things “pan” – Panettone meets panforte meets pandoro! Tis the season, after all. 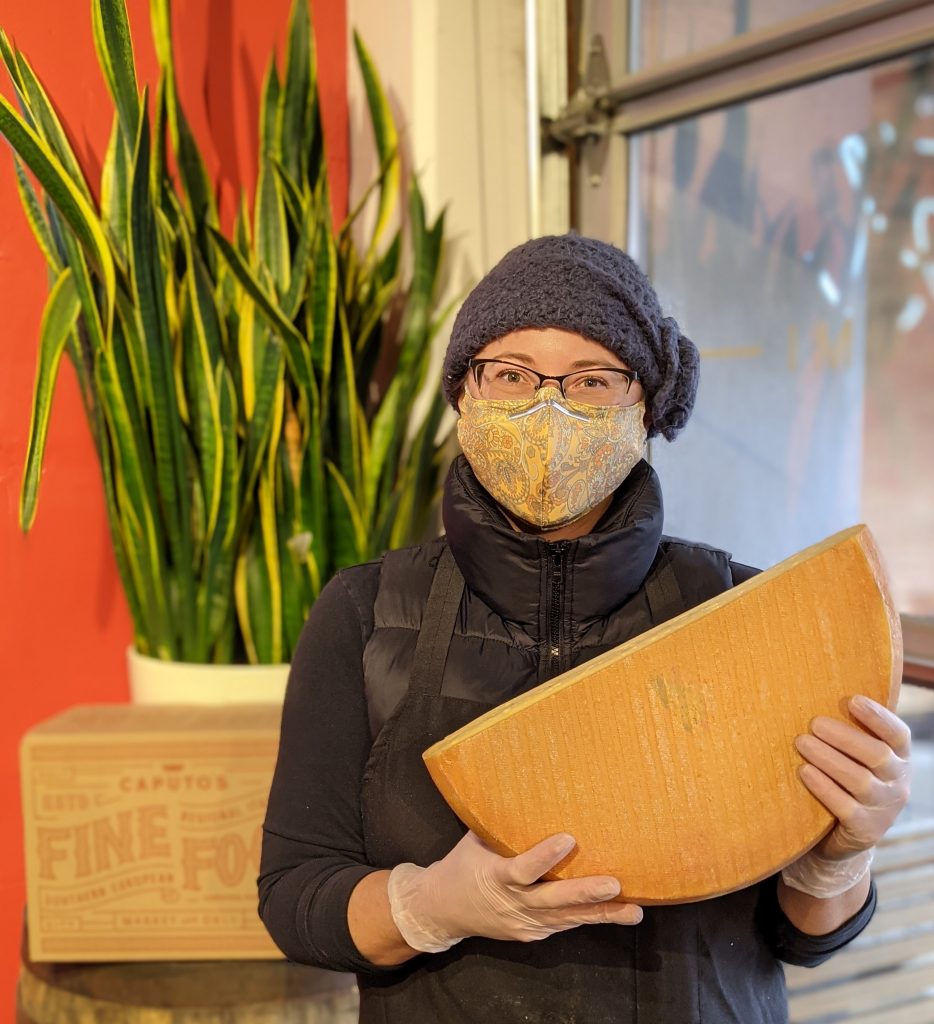 Half Wheel of Raclette – This Christmas, Antonia is sharing Raclette with friends and family. Since she can’t give them actual hugs, she’s giving “inside hugs,” of the coziest, most comforting cheese she knows. 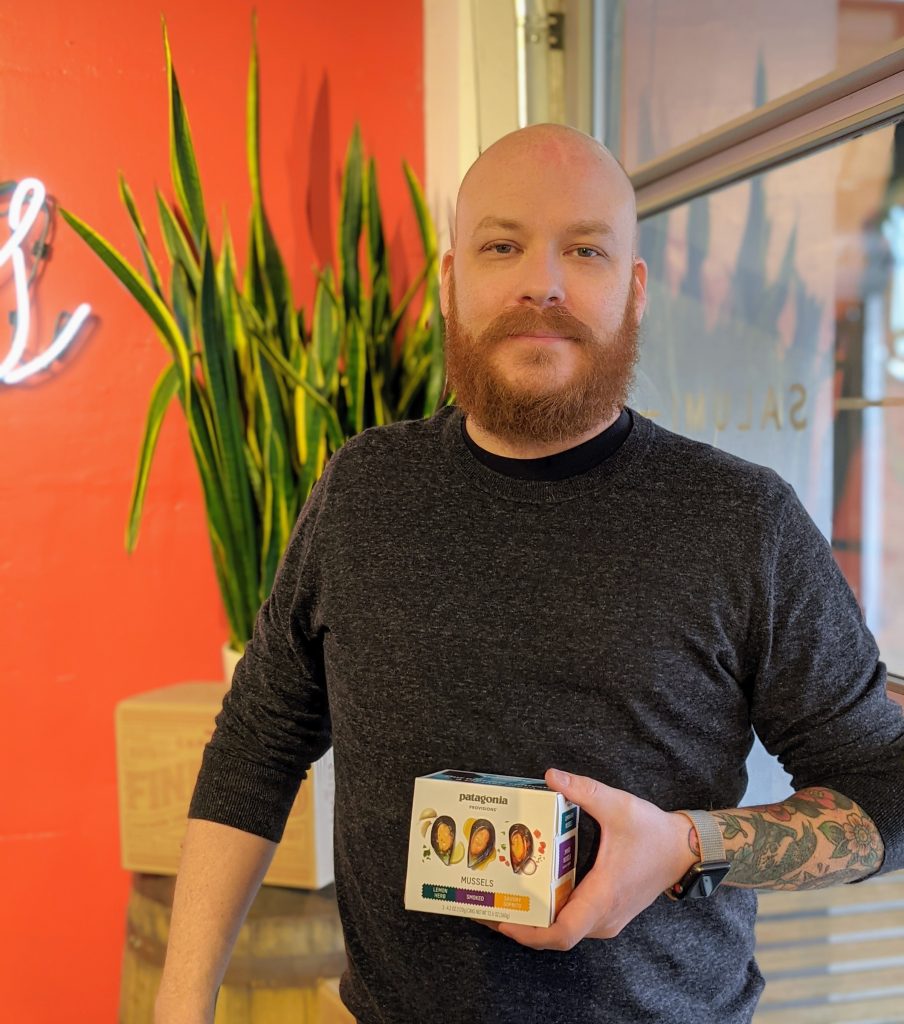 Patagonia Provisions Mussels Gift Pack – Our New Mexican native and fearless 15th leader knows a thing or two about serious flavor. Especially when it comes to conservas! Patagonia (yup, same company as the parkas and tents) triple threat of mussels is right up his alley. 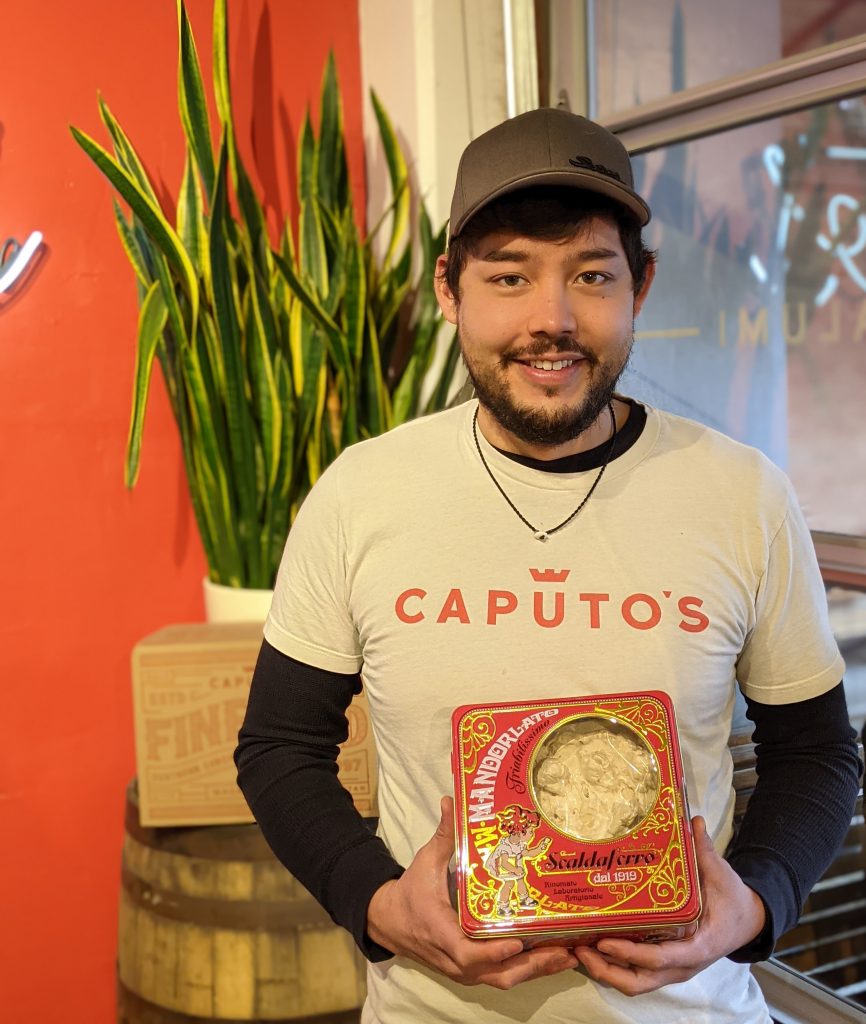 Scaldaferro Crumbly Nougat Pie – In life there are precious few morsels that transport the consciousness to a different time and place. This is one of those morsels. When an artisan makes nougat based on the waning or the waxing of the moon and explains it in such a way that makes sense, Austin goes out of his way to eat – ahem, gift – that nougat. 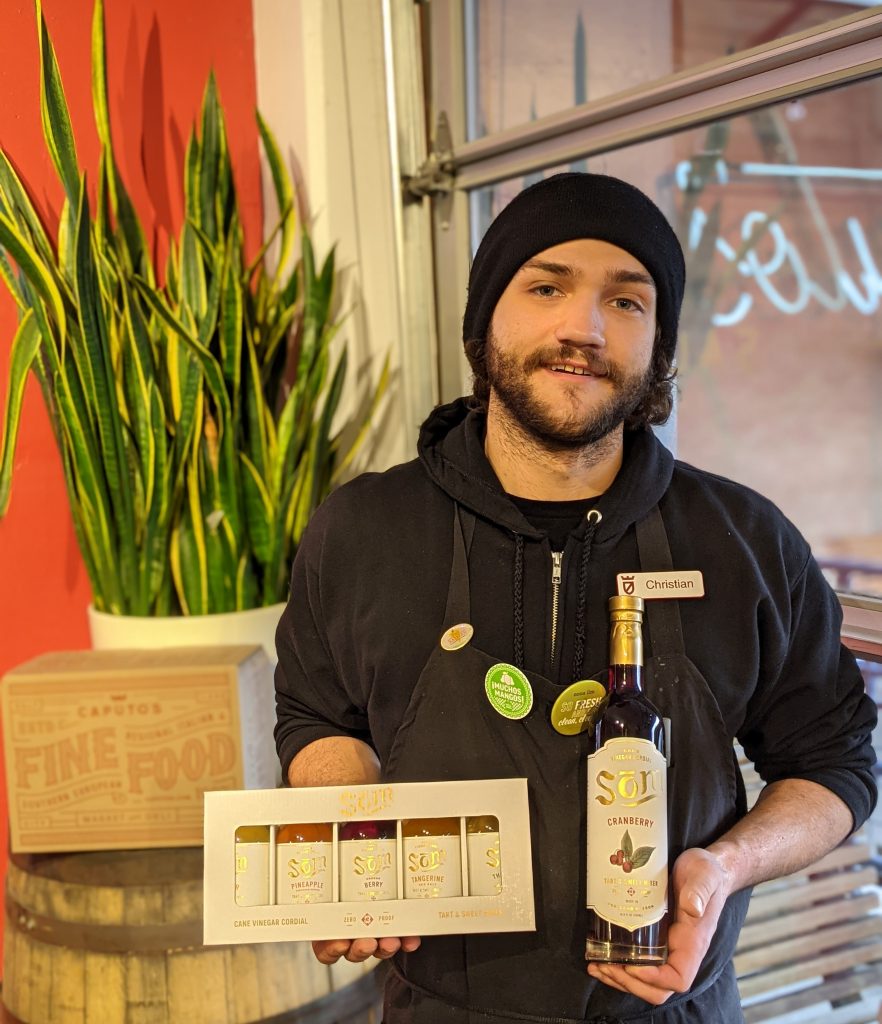 Som Cordial Gift Pack and Cranberry Som – Christian is the cheeriest guy in the deli! And he enjoys a cheery drink as much as anyone. Som’s cordials make bev making easy (and delicious!) for both cocktail and mocktail drinkers alike. 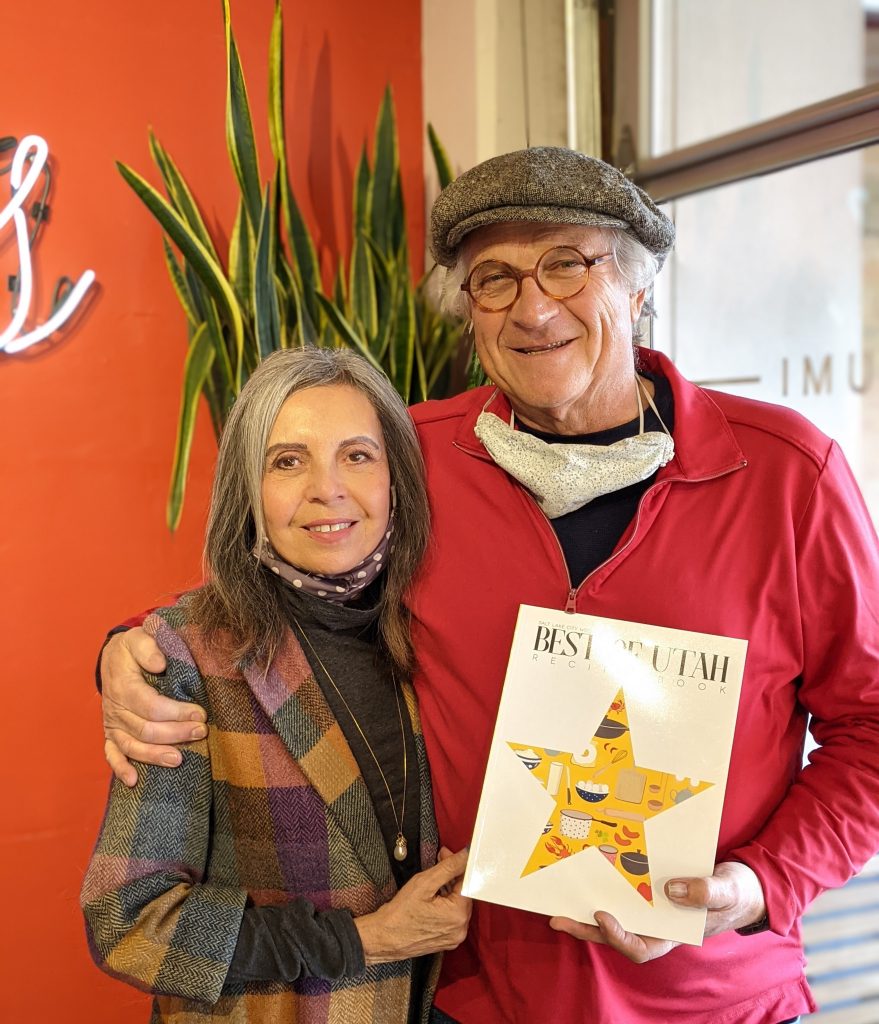 Tony and Mary Caputo
The OG himself and his fine lady

City Weekly’s First Every Recipe Book – Tony and Mary are friends with everyone in the local food community! His gift, then, is no surprise. He’s gifting the City Weekly’s Recipe Book – a commemorative compilation of recipes from top Utah eateries and distilleries. But wait – there’s more than just cooking how to’s – the proceeds benefit the Galena Fund (support for local journalism) and the Tip Your Server Campaign (support for local displaced waitstaff in the Hospitality industry). 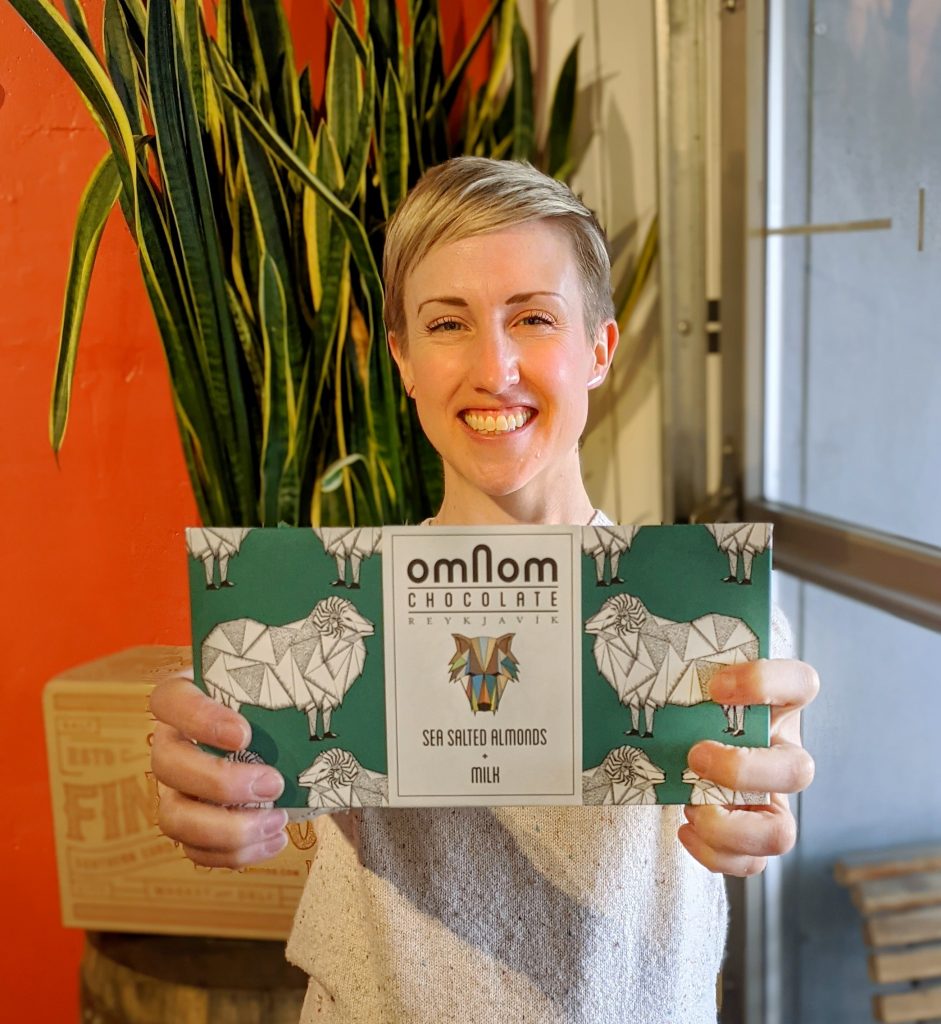 Omnom GIANT Sea Salted Almonds bar – Heather is known for her enthusiasm – for all things cheese, chocolate, and, well, really anything in our markets! And when full 8 oz GIANT Omnom Chocolate bars landed from Iceland, you could hear her squeal for miles. 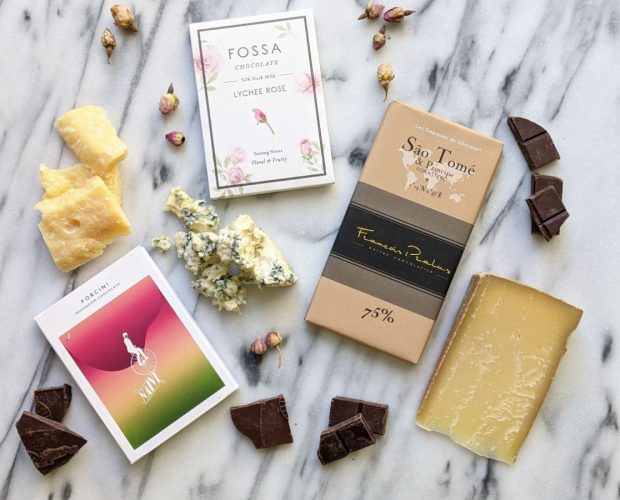 by Heather Aagard on August 20, 2020
post_password_required

Oreos and milk. Peanut butter and Jelly. You’ve been creating “pairings” your whole life without realizing it! Meet the hottest pairing since fries and milkshakes – chocolate and cheese. Explore your creative, adventurous palate with the three introductory indulgent combinations below. 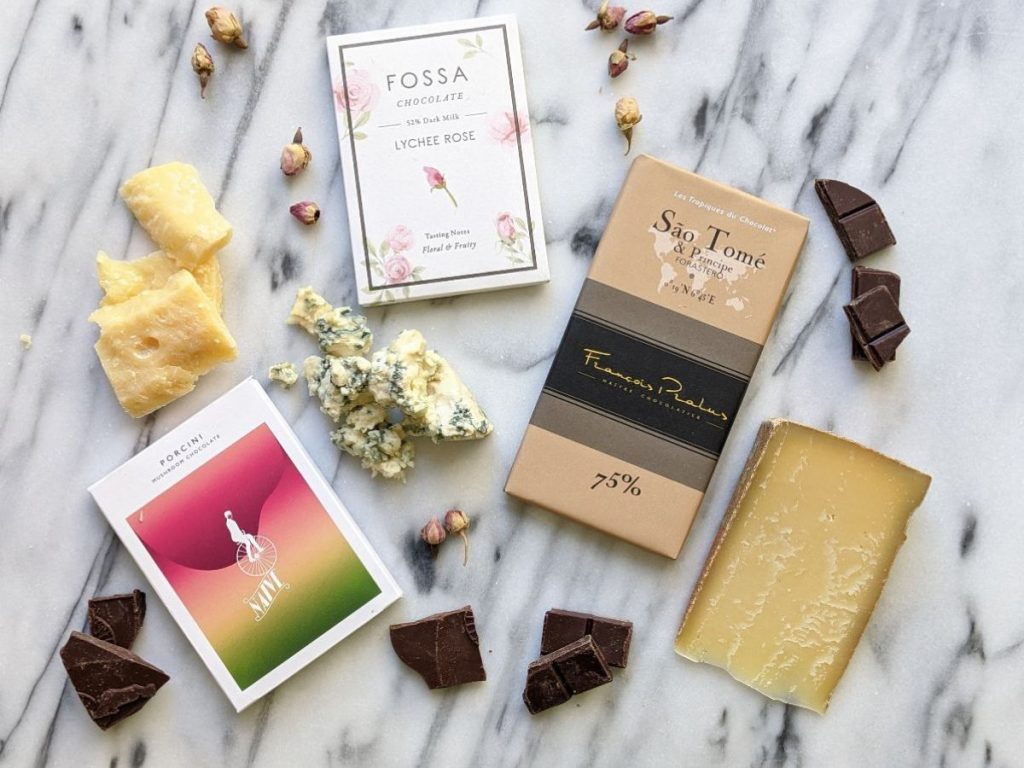 Pralus Sao Tome: Pralus presents dark, fudgy bars highlighting both the iconic French style (deeply roasted, high cocoa butter content) and the terroir of specific regions. Sao Tome, made with the island’s unique strain of Forastero beans, is fruity, spicy, and pleasantly acidic.
Paired with:
Ur-Eiche: This washed cow’s milk cheese is created by a team of mostly women at the Swiss mountain dairy of Girenbad. Led by award winning cheese maker Christa Egli, the dairy uses homemade rennet and pays a higher than average price for exceptional local milk. Ur-Eiche is washed with oak extract, creating a light barrique taste, with notes of pine nuts, buttered toast and roasted shallots.
Why this works: The nutty, savory-sweet flavors of the cheese contrast with the acidity of the chocolate, creating a balanced bite in your mouth. Additionally, the roasty, dark notes from Pralus’ style compliment the buttered toast flavors in the cheese (think coffee with pastries!).

Naive Porcini: Yup, porcini, as in the mushroom. In dark milk chocolate! Such is the creative genius of Domatas Uzpalis, founder of Naive Chocolate. By using locally sourced Lithuanian ingredients – like porcini mushrooms – blended with velvety chocolate, he challenges our conceptions of what “should” be paired with cacao. Trust us – the earthy mushroom + creamy chocolate works.
Paired with:
Sapore del Piave: Produced in the Veneto region of Northeast Italy, Sapore del Piave takes the best of the Parmigiano Reggiano and the best of the Swisses and comes together in one glorious moment. Full of crystals and savory-sweetness.
Why this works: The earthy mushroom begs for contrasting sweetness, and Sapore del Piave doesn’t disappoint. Additionally, the creaminess of the chocolate is a satisfying contrast to the crystalline texture of the cheese.

Fossa Lychee Rose: Rose tea-infused Haiti 52% Dark Milk Chocolate topped with dehydrated lychee from Thailand and crunchy cacao nibs.
Paired with:
La Peral: Produced by third generation cheesemakers Esther Alvarez and her husband Jose Luis Lopez at the family’s dairy in Northern Spain. Made from a blend of cow’s milk and sheep’s cream, La Peral boasts savory richness and a bit of crunch from tiny granules in the light blue veins.
Why this works: Usually our rule of thumb for blue cheese with chocolate is the addition of vanilla to the chocolate! However, the floral aspect of rose tea steps in nicely as a substitute in this pairing, while chewy bits of lychee provide contrast to the cheese’s fudgy texture.

PSST! Want to know more? Join us at an Intro to Fine Cheese class! Looking for even more cheeses to take home (or have them shipped to you)? Start here. 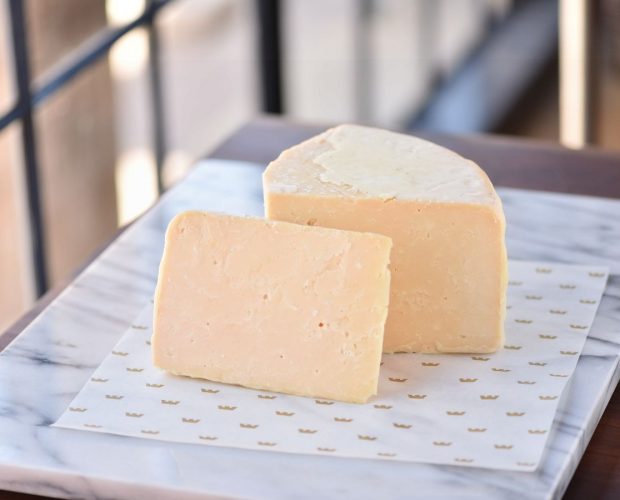 by Heather Aagard on February 18, 2019
post_password_required 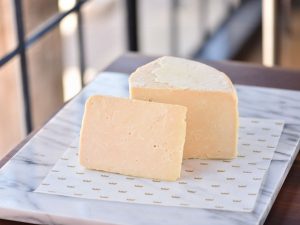 This is the OG of the Caputo’s Cheese Caves. This oldie but goodie dates back to our early Cave days, and has only gotten better with age. After a minimum of 16 months in the Caves, Grotte Caputo emerges with the coveted amino acid crystallization, often referred to as “flavor crystals,” along with rich flavor and slightly crumbly (read: perfect table cheese) texture.

Constantly a crowd pleaser, Grotte Caputo is best described as a hybrid of piquant Asiago and a sweet, nutty 4 year-old Gouda, with notes of brown sugar, cream, grass and coffee.

Order yours here or stop by any of our Utah stores for a sample! 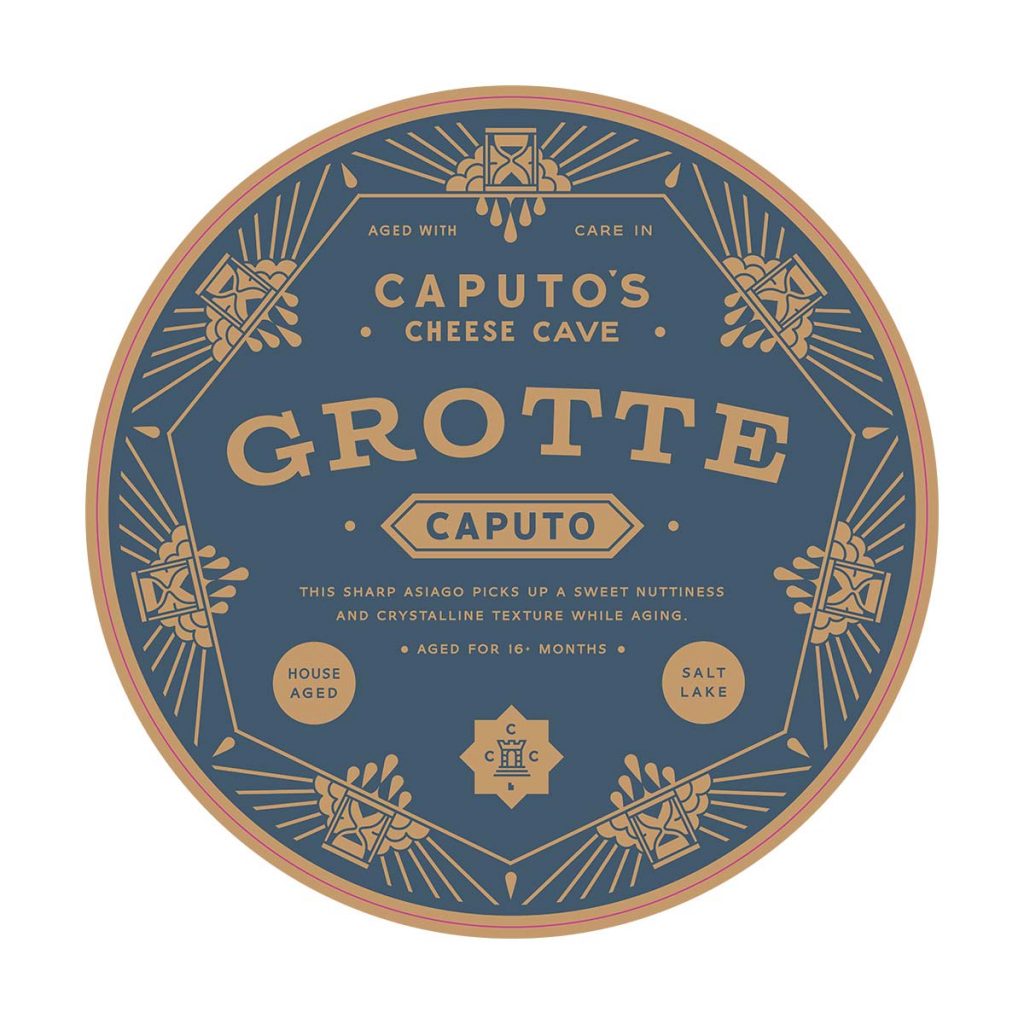 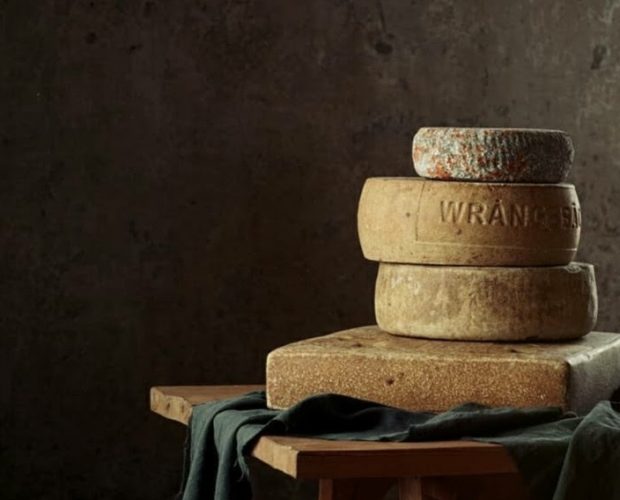 by Heather Aagard on November 16, 2018
post_password_required 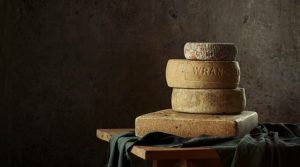 Tis the season for the warmest, most comforting of cheeses.

Consider Wrångebäck your new best friend for fall’s cold nights. Hailing from a Swedish farm dating back to 1225, Wrångebäck is expertly created by fourth generation cheesemakers. Dense, ultra-creamy, with layer upon layer of browned butter flavor, this raw cows’ milk cheese tastes like sitting in front of a cozy fireplace feels. Perfect for autumn cheese plates, melty soup toppers, or whatever else needs a dose of cozy richness. It’s like browned butter in cheese form.