by Adrianna Pachelli on June 29, 2017 in Caputo's Culture 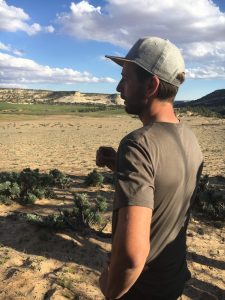 Evan led us out of Hell’s Backbone Farm, across another plot of land, over a fence, up a hill, and then into the sunshine atop an Eastward(ish) facing hill. We Goat Campers gathered as close as the warm afternoon sun would allow us to hear Evan’s story of how he came to arrive on this hill and what lies ahead for him. As we listened, the sun dipped further behind us and extended a welcome shadow over the now un-planted land. Soon though, this will change.

I have a long, loving history with Evan. Before food and wine reunited us in adulthood, Evan was a youth group intern at a church I attended with my family in junior high and high school. I was (and still am) crazy about his warm, infectious personality, his beautiful voice, and his kind heart. Evan moved on in his life to learning about and then making wine on four different continents for about a decade while I quietly continued along my path through college and beyond, most of that here at Caputo’s. Evan reappeared in my life as the wine director at Pago one summer evening. His clear rimmed glasses and wine vocabulary assured me he was miles ahead of me in both coolness and wine knowledge, but his smile and jovial nature reminded me he was the same friend from before.

Another year or so later, I attended the release celebration for Ruth Lewandowski’s very first wine, Mahlon. Evan’s story and the creation of Ruth Lewandowski is lengthy and beautiful and I will never, ever be able to do it the justice it deserves (you can find a small bit of that here). Instead, I will tell you that I became acquainted with natural wine under Evan’s spell, and I haven’t looked back. Beginning in 2012 and five years later, Evan has been making wine in Utah from California grown fruit. The wines are a fascinating mix of delicious, intriguing, and challenging nuances that take hold of you and don’t let go. 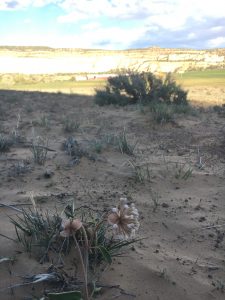 Five years and six wines after the first release of Mahlon, I was standing behind Evan on that hill in Boulder. Since the inception of Ruth Lewandowski, the goal has always been to make wine in Utah from Utah grown fruit. Wine is not the kind of industry that is kind to newborn labels and makers. The means required to achieve such a lofty goal take many years (five-ish) and an unfathomable amount of work. But, Boulder is a place where dreams come true and hard work is rewarded with a bounty of support and serendipitous circumstances. On that hill, not a mile from our Hell’s Backbone farm, a dream became destined to become truth and reality. Vines will be planted on that hill in the coming years and our little group had the very humble honor of being the first people to see it with Evan. Ruth Lewandowski will make a home in Boulder, Utah alongside the ladies of Hell’s Backbone legend and all the other kind inhabitants of this beloved town.

Utah is, however, a curious little place. We Utahns proudly wear our Local First buttons and hats, carry around our reusable Eat Local canvas totes, and display our locally produced beers, distilled spirits, and vegetables on any available surface and social media platform possible. We love being locavores… well, mostly. Utah has been a challenging market for Ruth Lewandowski. RL Wines are only available by special order through Utah’s liquor and wine stores and I can count on two hands the restaurants in town that offer these wines on their lists. In a city so dedicated to local fare, we’ve forsaken one of our own. Evan’s biggest markets for his wines are San Francisco, New York City, and Paris. Notice Utah is not included. My typical sunny disposition breaks with fiery anger when I have to talk about this, and we do have to talk about it.

Though we are but a small market for wine compared to the booming cities along the East and West coasts, there is a seat at the table for every producer, especially a local one. New perspectives often challenge what we once knew as ‘good’ and ‘right’. This is no different. Yes, there is more than one way to make wine taste good. Yes, winemakers can choose whether or not to add yeasts and other ingredients to wine. No, one way is not more right than the other. Yes, we can enjoy wines made both ways. And you know what’s great about that? We can disagree and have have fond affections for different wine, and I will still respect you (yes, you), your palette, and your right to drink whichever wine makes you happiest. Each wine has its own story, from the people behind the bottle to the work that’s gone into it all the way to us, the consumer. The beautiful thing about it all is that each of us affects the other, which is always something for the consumer to consider; what we purchase affects both our local and national wine industry and this power is, perhaps, just as impactful as anyone else involved. I will simply ask that you consider the people behind the bottle, the work that’s gone into it, and how your purchasing power affects both our local and national wine industry.

Every wine has a story. This particular story has affected me personally and I can’t help but share it.

Evan is my friend. He is my talented, driven, hard working friend that makes thought provoking, delicious wine. I am so proud to know him and to have been able to participate in this journey. There is a sunshine-y hill in Ruth Lewandowski’s future, and I suspect one day soon I’ll visit again and the view will be drastically different.